Quick procedural note: you can get the data in .csv format via my github repo here.

This vignette present a few simple ways to evaluate average treatment effects when some covariates are correlated with both the assignment to treatment and the outcome variable. This is sometimes refered to as sample selection bias or the self selection problem. Let’s consider the example from Matai Cattaneo’s 2010 Journal of Econometrics study of the effect of smoking during pregnancy on babys’ birthweights. The precise empirical problem posed here is that women choose whether or not to smoke, so assignment into treatment and control groups may be non-random. Moreover, the probability of receiving the treatment (smoke v. not smoke) may be correlated with other variables in the model (like age) which are also correlated with the outcome. This is sometimes refered to as a confounding variables problem.

This workbook illustrates a few approaches for estimating average treatment effects using observational data when self selection into the treatment grouping is a concern:

The data we will use is from from Matai Cattaneo’s 2010 Journal of Econometrics study. These data contain, among other things, measurements on birthweight of 4642 newborn babies, maritial status of the mother, age of the mother, and smoking status (smoked v. did not smoke during pregnancy).

Let’s get a quick look at the data:

The estimation of average treatment effects is often complicated by the issue of non-random assignment to treatment and control groups. Here we illustrate this problem using some simulated data on baby’s birthweight and mother’s age and smoker/non-smoker status. In this case, older mothers are more likely to smoke (read: more likely to receive the treatment) but older mothers also tend to give birth to heavier babies. 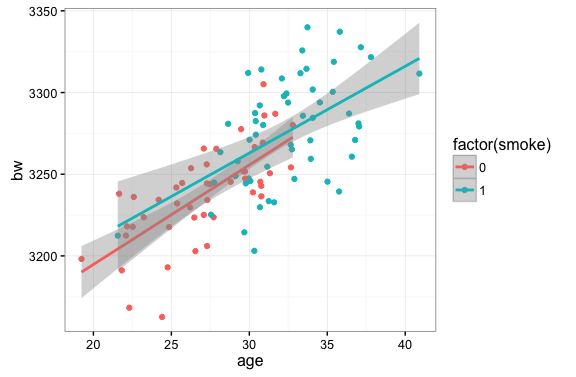 One way researchers have concocted to deal with this phenomenon is to use the Potential Outcome Mean (POM) estimator. This basically amounts to running an OLS regression for each subsample of the data (smokers and non-smokers), using the coefficients of each regression to generate fitted values for the entire data sample, then comparing the means for each set of fitted values. That was convoluted….an example will probably clarify things:

Another popular way of correcting for non-random assignment to treatment/control groups is to use propensity score weighting.

The propensity score is basically the estimated probability that an individual with certain characteristics will receive the treatment. We do this in two parts: first we estimate a model that predicts the probability that each invidual will be included in the treatment group conditional on some covariate values. This is generally called the Treatment Model.

In general, the Treatment Model can be specified many ways. In this application we specify a probit model where the binary outcome, ‘smoker’ is modeled as function of age:

where $\Phi$ is the cumulative density function for the standard normal distribution.

The idea here is pretty simple: we are going to weight observations according to the inverse of thier probability of being included in the sample. Outcomes from smokers will be weighted by $\frac{1}{p_i}$. In the plot below we can see that this will attach a higher weight to outcomes from younger smokers. Conversely, we will weight outcomes from non-smokers by $\frac{1}{1-p_i}$…this attaches a higher weight to older non-smokers. In our simulated data sample is skewed by the fact that older mothers are more likely to smoke and more likey to have heavier babies. The inverse probability weight correction deals with this by attaching higher weights to observations that are underrepresented in the sample (non-smoking older mothers and smoking younger mothers). 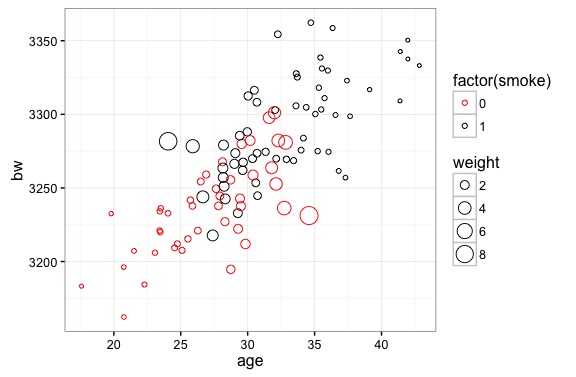 In the following chunk we estimate the Average Treatment Effect with our Cattaneo (2010) data using the inverse probability weights to adjust the means:

We can also use the propensity score as a regression adjustment. A good reference for this estimator is this post on Andrew Gelman’s Blog.

In the chunk below the treatment model is specified as a probit model where the [0,1] outcome smoker v. non-smoker is modeled as a function of age, age squared, marital status, education level, and an indicator for whether the mother has had a baby before. Parameter estimates from this model are used to generate a predicted probability of smoking for each individual in the sample. This predicted probability is the propensity score.

The intuition and mechanics of Propensity Score Matching are pretty simply to understand. The statistical foundations (i.e. how to do PSM right) are pretty complex. My understanding of causal inference doesn’t come close to a Paul Rosenbaum, Don Rubin, Andrew Gelman, or Judea Pearl…so I’m not going to preface this discussion of PSM with a lot of cautionary tales. I’m not going to run through a big list of ‘potential pitfalls’ or common violations of the ignorability condition. I’m just going to walk through the nuts-and-bolts of how to take our birthweight data and estimate an average treatment effect using PSM.

But since I’m not providing a bigger discussion of technical minutia let me offer this advice: if any of you are considering using Propensity Score Matching Models in any serious application you should first:

A typical propensity score matching application goes something this:

Step 0: read in the data…I know this is a little repetitive…I should probably clean this up but for now just live with it please.

Steps 1 and 2: run the logit model and get the predicted probability of receiving the treatment (propensity score).

Step 4: examine the covariate balance. In a good PSM study the covariate distributions conditional on propensity score should be similar across groups. 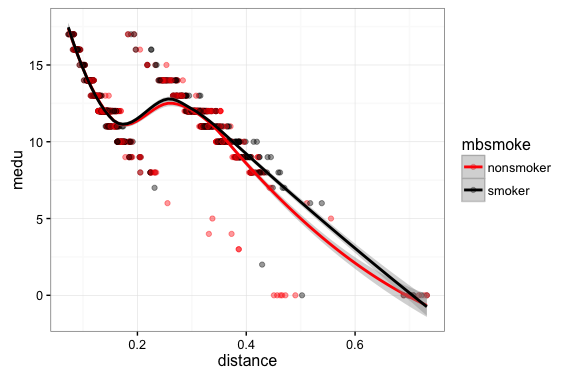 Step 4A: inspect covariate balance using a t-test of means

Step 5: Finally, to get the average treatment effect from our PSM set-up, we compare the grouped means in the matched sample: